Ian MacVicar - Are We Safe? 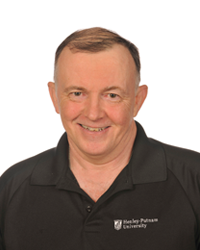 Physical and cyber security assessment tools should be both easy to use and effective. However, the question, “are we safe?” is unanswerable without an understanding of the psychological context of the problem. Attack trees, data flow diagrams (DFD), matrices and threat modelling tools (TMT) such as the CARVER (physical) and DREAD and STRIDE (data) exist to help members of the security communities of practice and of interest to assess vulnerability and risk to their assets. However, individual leaders and large institutions which depend on such tools can fall into cognitive traps such as confirmatory, recency, and vividness biases - leading to ignoring other factors and rushing to premature closure in security-related decisions. Many security officials would benefit from a better understanding of all aspects of physical and information security measures, including those related to the psychological shortcomings that may attend their decision making processes.​
​
​​BIO:
Lieutenant-Colonel (LCol) Doctor (Dr.) Ian MacVicar has served for over three decades in the Canadian Armed Forces, where he specialized in emergency response to natural disasters and to those caused by deliberate human action.  LCol MacVicar’s national and international military expertise spans the tactical, operational, and strategic levels.  He has served in Artillery, joint service, and Chemical Biological Radiological Nuclear defence units in Canada and on deployed operations.  He has received the Chief of the Defence Staff Commendation for his work in CBRN defence.
Dr. MacVicar is a Summa Cum Laude graduate of Henley-Putnam University’s Doctorate of Strategic Security program, where his doctoral research focused on the interaction of human cognitive limits, institutional biases, speculative fiction, and internal security law in Canada, the United Kingdom, and the United States of America.  Dr. MacVicar holds a Bachelor of Arts (Honours) from Acadia University, a Master of Arts in International Affairs (Conflict Analysis) from the Norman Paterson School of International Affairs at Carleton University, and a Master of Defence Studies from the Royal Military College of Canada.  LCol MacVicar is a graduate of the Canadian Forces College Joint Command and Staff Course and the Land Forces Staff Course.  Dr. MacVicar is a member of the International Association For Intelligence Education, the U.S. National Honor Society Order of the Sword and the Shield, and Delta Epsilon Tau International Honor Society.